The Georgia Construction Aggregate Association (GCAA) Annual Midyear Meeting was a great success, according to Executive Director Jeff Wansley. The meeting was held on June 23-26 at the Ponte Vedra Inn & Club in Ponte Vedra Beach, Fla. More than 220 attended the event, including producer and associate members and their families.

Special guests included key legislators Rep. Vance Smith and Rep. Brad Thomas. Smith and Thomas were joined on stage by Katie Gregory of McGuire-Woods and Terry Mathews of Mathews & Maxwell, which rounded out an Environmental, Political and Legislative Panel. 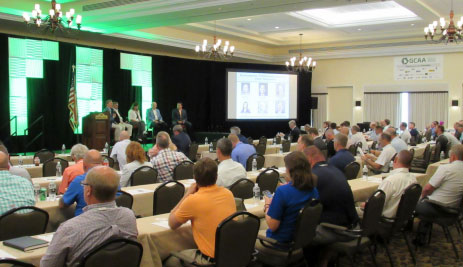 The keynote speaker was Ward Nye, chairman of the board and president and chief executive officer of Martin Marietta, who gave a presentation on the state of the aggregate industry.

GCAA also reported that the association and Vulcan Materials helped sponsor the 7th Biennial Conference of the Construction History Society of America. The aggregate industry was featured at the conference. In addition to helping host the kick-off reception, Vulcan Materials hosted the group for a quarry tour at the Kennesaw Quarry.