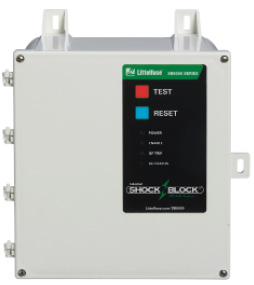 Littelfuse Inc. launched its SB5000 Industrial Shock Block Ground-Fault Circuit Interrupter (GFCI) to help protect workers from electrical shock by detecting leakage current, and interrupting the circuit for loads up to 60 A. In addition, the SB5000’s advanced ground check protection functionality monitors the ground wire for continuity, from the Shock Block to the load, to interrupt power or prevent energization of equipment if compromised.

The SB5000 Shock Block is suitable for many industries such as construction, mining and general manufacturing as well as in places where electrical equipment is being used outdoors or in wet environments.

“More than 90% of electrical fatalities among U.S. workers are due to electrical shock, and even minor shock injuries can result in life-altering and debilitating symptoms,” stated Mark Pollock, global product manager, Littelfuse Industrial Business Unit. “To help prevent these events, systems should be designed to eliminate the hazards with engineering controls like the Littelfuse SB5000 Shock Block which helps reduce system downtime, lower costs, and most importantly prevent personnel injuries and fatalities.”

In addition to the standard functions such as a 6 mA trip level for Class A and 20 mA for Class C and D devices, the Littelfuse SB5000 Shock Block reduces unnecessary tripping by implementing the inverse time curve defined by UL 943 as well as a DFT filtering algorithm; includes NEMA 4X and IP69K enclosure ratings; and has advanced ground-check functionality with a two-stage Zener termination option meeting CSA M421, which can identify a crushed cable before the equipment is energized.