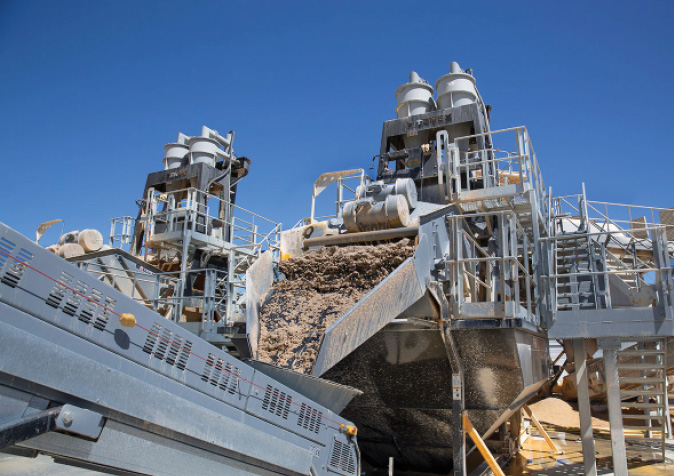 The sandstone deposit located in the Blue Mountains produces premium quality construction sand that is washed and classified using a state-of-the-art Terex Washing Systems wash plant. The design of the plant can produce up to 300 tph of quality sand and recycles roughly 90% of the water used during the washing process.

The wash plant features a H30 (50 tonne) feeder that receives the raw sandstone feed material and distributes it evenly on the main conveyor. At this point any stones or rock that are larger than 100 mm are removed from the feed material due to the grid covering the feeder. The H30 Feeder also features a hydraulic tipping grid that can be controlled from the cab so that any material stuck on the bars can be cleared.

With the sand distributed evenly on the main conveyor it makes its way up to the modular 20 x 8 two-deck Rinser Screen. This screen has been designed specifically to handle the tonnage needed for this operation. A total of 19 spray bars give the material an initial rinse as the vibrating screener shakes the sand and stone down through the polyurethane decks as it is classified by size. The polyurethane decks have a much longer wear life than that of metal decks. Any larger aggregates can pass through the screen onto aggregate and oversize conveyors where they are stockpiled as products for sale.

Any sand, silt, clay or other fine impurities that were present within the feed material is washed to the split catchbox of the screener. Terex Washing System catchboxes have adjustable blending paddles, which assist in blending the correct amount of fines into the coarse fraction. This ensures the required spec is always achievable.

The material is gravity fed into one of two FM 200C Sand Plants. Each sand plant receives a separate split, one coarse sand and one fine sand. For this application the standard units were upgraded to separators, rather than the standard hydrocyclones. This was done to cope with larger volumes of fines, as well as to deal with potential variation in feed stocks.

Separators use centrifugal force to remove the sand from the silt and clay so that it can be transferred onto the high frequency dewatering screens. These dewatering screens remove the remaining water within the sand so that only 10% to 15% of water is left. The sand that is now up to spec is then transferred onto a 26-meter radial stacking conveyor that offers a large stockpile capacity.

The water that, up until this point, has been used to initially rinse the feed material, wash the sand within the FM 200C and has been recovered from the dewatering screen is pumped into the 17-meter rake thickener tank. The rake thickener allows the silt and clay particles within the sludge to settle at the bottom of the tank, while the clean water weirs over the edge to be re-used. The integral scrapers aid transportation of material from the outskirts of the tank to the outlet, thus accelerating the removal of sludge from the thickener.

This process is sped up with the use of a Flocculant Dossing Unit, which dosses the sludge on its way to the rake thickener. The flocculant that is added to the sludge causes the waste particles to bind together, creating a particle with a larger mass, which then sinks to the base of the tank faster. Dossing the sludge with flocculant dramatically increases the speed at which the clean water can be recycled back into the wash plant.

Terex Washing Systems also advised the customer of the need for a robust water-management system that would be both environmentally friendly and save on running costs.