The U.S. Geological Survey (USGS) – in its just-released Mineral Commodity Summaries 2022 report – estimates that 2021 total aggregates production will come in at approximately 2.5 billion metric tons per year (Gt), more than a 3% increase over 2020; with an additional 204 million metric tons (Mt) coming from the cement, gypsum, industrial sand and lime sectors. 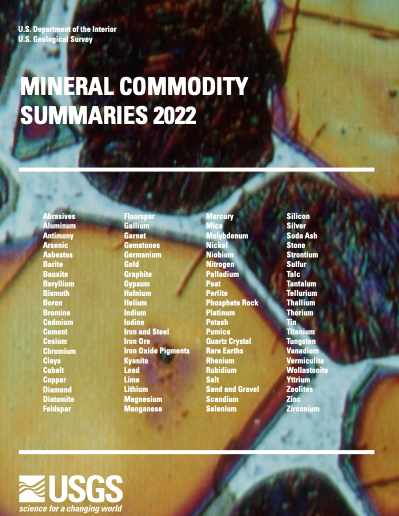 For 2021, USGS estimates that 1.5 Gt of crushed stone valued at more than $19 billion was produced by an estimated 1,410 companies operating 3,440 quarries and 180 sales and (or) distribution yards in 50 states. Leading states were, in descending order of production, Texas, Missouri, Florida, Pennsylvania, Ohio, Georgia, North Carolina, Virginia, California and Tennessee, which together accounted for about 54% of total crushed stone output.

Of the total domestic crushed stone produced in 2021, about 70% was limestone and dolomite; 15%, granite; 6%, traprock; 5%, miscellaneous stone; 3%, sandstone and quartzite; and the remaining 1% was divided, in descending order of tonnage, among marble, volcanic cinder and scoria, calcareous marl, slate, and shell. It is estimated that about 72% of crushed stone was used as a construction aggregate, mostly for road construction and maintenance; 16% for cement manufacturing; 8% for lime manufacturing; 2% for agricultural uses; and the remaining 2% for other chemical, special and miscellaneous uses and products.

For 2021, USGS estimates that 1.0 Gt of construction sand and gravel valued at $9.9 billion was produced by an estimated 3,870 companies operating 6,800 pits and 340 sales and (or) distribution yards in 50 states. Leading producing states were, in order of decreasing tonnage, California, Texas, Arizona, Minnesota, Utah, Michigan, Washington, Ohio, Colorado and New York, which together accounted for about 53% of total output.

It is estimated that about 46% of construction sand and gravel was used as portland cement concrete aggregates, 21% for road base and coverings and road stabilization, 13% for construction fill, 12% for asphaltic concrete aggregate and for other bituminous mixtures and 4% for other miscellaneous uses. The remaining 4% was used for concrete products, filtration, golf course maintenance, plaster and gunite sands, railroad ballast, road stabilization, roofing granules, and snow and ice control.

Texas, Missouri, California and Florida were, in descending order of production, the four leading cement-producing states and accounted for nearly 44% of U.S. production. Overall, the U.S. cement industry’s growth continued to be constrained by closed or idle plants, underutilized capacity at others, production disruptions from plant upgrades, and relatively inexpensive imports.

The leading producing states were, in descending order of production, Texas, Wisconsin, Illinois, Missouri, Oklahoma, Louisiana, North Carolina, Alabama, California, Tennessee, New Jersey and Minnesota. Combined production from these states accounted for about 86% of total domestic sales and use.

Approximately 64% of the U.S. tonnage was used as hydraulic-fracturing sand and wellpacking and cementing sand; 11% as other whole-grain silica; and 10% as glassmaking sand. Other uses were, in decreasing quantity of use, foundry sand, whole-grain fillers for building products, recreational sand, other ground silica sand, and silica gravel, which accounted for 12%, combined. Other minor uses were, in decreasing quantity of use, chemicals, abrasives, filtration sand, ceramics, roofing granules, fillers, traction and metallurgic flux, combined, accounted for the remaining 3% of industrial sand and gravel end uses.

In 2021, USGS estimates that domestic production of crude gypsum was estimated to be 23 million tons with a value of about $210 million. The leading crude gypsum-producing states were estimated to be California, Iowa, Kansas, Nevada, Oklahoma, Texas and Utah.

Overall, 47 companies produced or processed gypsum in the United States at 52 mines in 16 states. The majority of domestic consumption, which totaled approximately 43 million tons, was used by agriculture, cement production, and manufacturers of wallboard and plaster products.

Small quantities of high-purity gypsum, used in a wide range of industrial processes, accounted for the remaining tonnage. At the beginning of 2021, the production capacity of 63 operating gypsum panel manufacturing plants in the United States was about 34.1 billion sq. ft. per year. Total wallboard sales in 2021 were estimated to be 28.0 billion sq. ft.

In 2021, an estimated 17 million tons of quicklime and hydrated was produced (excluding independent commercial hydrators ), valued at about $2.3 billion. Twenty-eight companies produced lime, which included 18 companies with commercial sales and 10 companies that produced lime strictly for internal use (for example, sugar companies).

In 2021, the five leading U.S. lime companies produced quicklime or hydrated in 22 states and accounted for about 78% of U.S. lime production. Principal producing states were, in alphabetical order, Alabama, Kentucky, Missouri, Ohio and Texas.

Major markets for lime were, in descending order of consumption, steelmaking, chemical and industrial applications (such as the manufacture of fertilizer, glass, paper and pulp, precipitated calcium carbonate and in sugar refining), flue gas treatment, construction, water treatment and nonferrous-metal mining.

The Rock Products Market Composite for 2022 – based on 2021 production figures – totals 2.704 Gt of material. Here is how it compares to previous years: