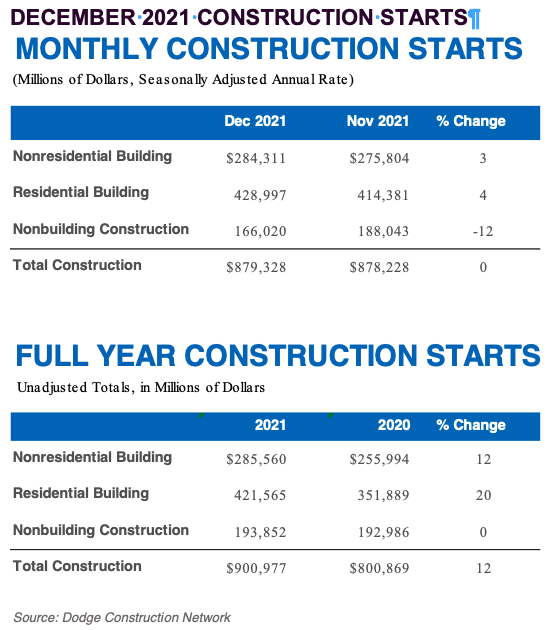 Highways were flat for the month, and down 6% for the year.

“The increase in construction starts was impressive given the many challenges the industry faced during the year. Higher material prices, labor shortages, and multiple waves of COVID infections threatened to dampen the recovery,” stated Richard Branch, chief economist for Dodge Construction Network. “However, construction remained resilient and persistent throughout the year in the face of these difficult issues. While these challenges will remain in 2022, the industry is well-positioned to make further gains fed by a growing pipeline of nonresidential projects waiting to break ground and the infusion of money directed towards infrastructure.”

Below is the breakdown for construction starts:

● Nonbuilding construction starts lost 12% in December to a seasonally adjusted annual rate of $166 billion. The only sector within nonbuilding to gain ground during the month was environmental public works, which gained 40%. Utilities/gas plants fell 79%, miscellaneous nonbuilding dropped 23%, and highway and bridge starts fell by less than 1%. For the full year, nonbuilding starts improved by 0.4% from 2020. Environmental public works rose 21% and utilities/gas plants moved 6% higher. However, miscellaneous nonbuilding starts were down 16% for the full year, and highway and bridge starts fell 6%.

The largest nonbuilding projects to break ground in December were the $1.3 billion East Side Coastal Resiliency project in New York, the $305 million Kirkman Road extension in Orlando, and the $177 million first phase of the Friant-Kern Canal Middle Reach project in Lindsay, Calif.

● Nonresidential building starts improved 3% in December to a seasonally adjusted annual rate of $284.3 billion. The commercial sector advanced 12% due to gains in retail, office, and hotel starts while parking structures lost ground. Institutional starts fell 17% in December as healthcare pulled back following a strong November. Manufacturing starts, meanwhile, posted a significant gain due to the start of a large project. For the full year, nonresidential building starts gained 12% from 2020. Commercial starts were up 8%, institutional starts improved 5%, and manufacturing starts rose 89% for the year.

The largest multifamily structures to break ground in December were the $1.0 billion Southside Park mixed-use building in Miami, the $398 million first phase of the Broadview at Purchase College senior living facility in Purchase, N.Y., and the $300 million 800 Broadway apartment tower in San Diego.

Regionally, total construction starts in December rose in the South Atlantic and Northeast regions, but fell in the Midwest, South Central and West regions.