As 2021 becomes 2022, the aggregates industry is looking forward with great optimism. The passage of the $1.2 trillion Infrastructure Investment and Jobs Act (IIJA) – a once-in-a-generation bipartisan infrastructure bill – will do that.

While the IIJA no doubt signals a vibrant future for the industry there will be growing pains and bumps in the road going forward. Rising costs, skilled labor shortages and lack of materials will continue to create challenges for the construction industry, according to the U.S. Chamber of Commerce.

“With the passage of a once-in-a-generation investment into our infrastructure network, everyone in the industry has a reason to celebrate,” said Michael Johnson, president and CEO of the National Stone, Sand & Gravel Association (NSSGA). He told Rock Products, “I know all of our members look forward to meeting the increased demand for aggregates and resilient construction materials. Therefore in 2022, NSSGA will continue to advocate for regulations that are reasonable and based on sound science. We will continue to provide new resources on pressing topics from workforce development, safety and environmental issues. NSSGA will ensure our members are fully prepared to tackle any challenge, so they can safely and efficiently produce the materials that our country is asking for.”

In his opening remarks, Dodge Construction Network’s Chief Executive Officer Dan McCarthy said, “We’ve come to realize it won’t be ‘construction after COVID,’ but ‘construction and the impact of COVID.’”

Dodge Construction Network’s Chief Economist Richard Branch shared that the dollar value of construction starts will increase 6% in 2022. Branch emphasized that, while residential construction will continue to play a large role in next year’s growth, a more balanced recovery in the nonresidential sector will begin – particularly as funding from the recently passed infrastructure package begins to enter the market. Alone, the total non-building value forecast of 32.5% year-over-year growth from 2021 to 2026 would instead be 14.9% without the bill’s passing.

Branch theorized that there are three main challenges that will impact the construction sector over the next year: price, people and productivity. These “triple P’s,” as Branch called them, will noticeably impact construction starts in 2022.

“All those projects sitting in planning are taking longer to get through, and while construction starts will grow in 2022, that growth is expected to be modest,” Branch said. “…it’s very clear, as we put all of this together, that if not for the challenges, shortages and prices that we’re currently facing, construction activity would be much stronger than it currently is.”

The labor shortage continues to impact almost every industry, not just construction. Construction employment increased by 31,000 jobs between October and November as nonresidential construction firms added workers for the third month in a row, according to an analysis by the Associated General Contractors of America (AGC) of government data. Association officials said construction firms were likely to have added even more jobs if they could find more qualified workers to hire with many firms reporting a growing number of unfilled positions.

“It is heartening to see steady job growth across all construction segments following a long period during which only residential contractors were adding employees,” said Ken Simonson, the association’s chief economist. “But record job openings show the industry needs still more workers as more types of nonresidential projects get started.”

Construction employment in November totaled 7,533,000, an increase of 31,000 since October and the highest seasonally adjusted figure since March 2020. However, industry employment still trails the pre-pandemic peak, set in February 2020, by 115,000 positions.

Branch fears that high material costs may not see resolution in 2022.

“From an operating perspective, plants are very slowly getting back to normal,” Branch stated. “But, we’re still dealing with trucking issues, we’re dealing with port issues, so I think the inflation we’re dealing with here in the construction sector, as it relates to materials and prices, is probably going to last into mid next year before we start to see prices pull back. But, even as those prices start to pull back or the inflation slows in the back half of 2022, that level of prices should remain fairly high, at least through the end of next year.”

The combination of these two aforementioned problems spearheads into what Branch thinks might be the most important problem to tackle in 2022: productivity.

“In a world where prices are rising, materials are hard to come by, and labor is scarce, the ability to do more with less is what’s going to be a critical path forward, in terms of increasing your profit margins,” Branch stated.

Improvements in productivity are not as simple as some may think. Productivity needs to improve at all levels within an organization, not just on-site technological advancements and adoptions.

“Productivity enhancements are not just always about on the job changes,” Branch said. “Many companies have made great strides, in terms of collecting and utilizing data within their own activities. So far though, comparatively few of those have been able to bridge, or make that full potential between their own internal data services and data provided by third parties or vendors or private data sources.”

IIJA funding will support new projects. The 2022 impact of those funds will depend on how quickly states obligate and award projects in the first half of the year. States will also have access to nearly $10 billion in supplemental highway funds through the 2018-2021 appropriations process and an additional $10 billion in COVID-19 relief funds. 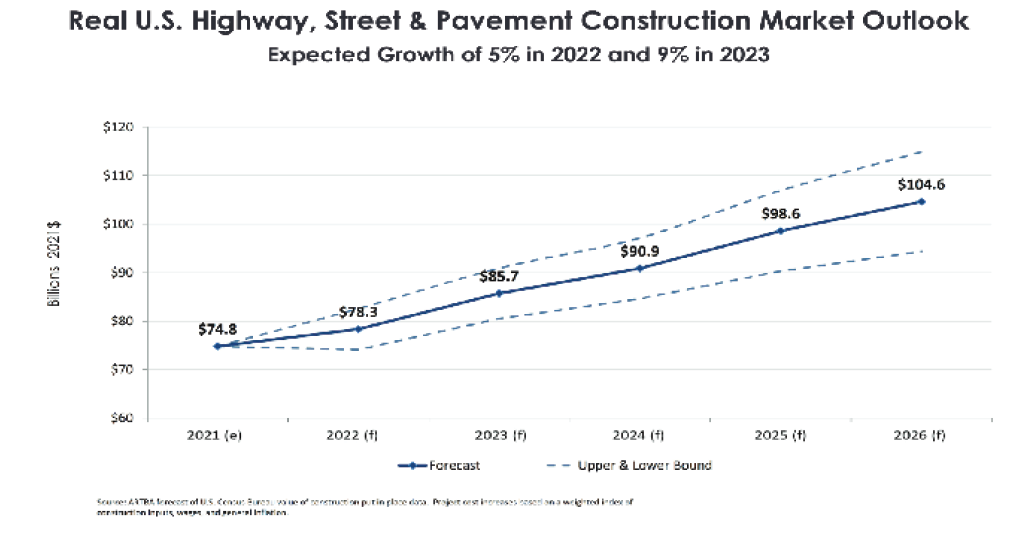 The estimated production for consumption in the first nine months of 2021 was 1.90 billion metric tons (Gt), an increase of 5% compared with that in the same period of 2020, according to Jason Christopher Willett, commodity specialist, National Minerals Information Center, U.S. Geological Survey (USGS).

The five leading states were, in descending order of production-for-consumption, Texas, California, Missouri, Ohio and Florida. Their combined total production for consumption was 220 Mt, an increase of 6% compared with that in the same period of 2020.

The five leading states combined total production for consumption in the first nine months of 2021 was 580 Mt, an increase of 4% compared with that in the same period of 2020 and represented 31% of the U.S. total.

The above estimates are based on information reported to USGS on its quarterly sample survey by construction aggregates producers.

“It is encouraging to see such a broad-based pickup in spending on nonresidential projects in the latest month,” said AGC’s Simonson. “But the construction industry still faces major challenges from workforce shortages and supply-chain bottlenecks.”

Association officials said that spending on many categories of public construction is likely to increase soon as the investments from the Bipartisan Infrastructure bill begin to flow. But they cautioned that the supply chain challenges and labor shortages were impacting construction schedules and budgets and prompting some owners to delay or cancel projects. They urged the Biden administration to explore new ways to relieve shipping delays and to invest more in career and technical education programs that serve as a pipeline into construction careers.

“On the surface, there is much to be encouraged by in October’s construction spending data,” said Associated Builders and Contractors Chief Economist Anirban Basu. “Nonresidential spending is now at its highest level since July 2020 and has rebounded 3.1% since bottoming out in June 2021. Nonresidential spending expanded meaningfully for the month and those gains were spread across most subsectors. Data characterizing the two prior months were upwardly revised by a combined $27 billion, or 1.7%.

“The bottom line is that 2022 should be an excellent year for nonresidential construction,” said Basu. “Performance will be led by public construction, especially in the context of a recently passed and large infrastructure package. Among the segments that are set to zoom ahead are roads and bridges, school construction, water systems, airports, seaports and rail. Traditional office and lodging construction will likely remain weak in much of the nation, however.”

Construction Starts
Total construction starts fell 14% in November to a seasonally adjusted annual rate of $867.8 billion, according to Dodge Construction Network. Nonbuilding and nonresidential building starts bore the brunt of the decline, falling 30% and 21%, respectively, after seeing sharp increases in October as three large projects broke ground. Residential starts gained a modest 3%. Without October’s large projects, total construction starts in November would have increased by 5%.

“Large projects aside, the underlying trend continues to point to a modest recovery in construction starts,” stated Dodge’s Branch. “However, even as projects continue to move forward, the short-term outlook remains cloudy due to continued escalation in material prices and labor shortages. While construction should see some reprieve in 2022, these challenges will restrain the industry’s ability to fully capitalize on both the large number of projects in planning and funding resulting from the infrastructure package. The result will be moderate growth in construction starts over the near-term.”

Regionally, total construction starts improved in the Northeast and Midwest regions but fell in the South Atlantic, South Central and West regions.